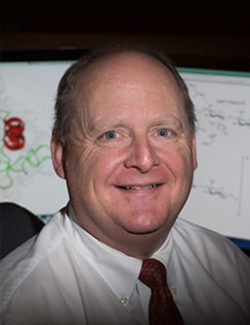 Dr. Moremen received his B.S. in Biology and Chemistry (1978) from Dickinson College and his Ph.D. in Molecular Biology (1984) from Vanderbilt University. Prior to joining the faculty at the CCRC in 1991, he spent five years as a Postdoctoral Fellow at Massachusetts Institute of Technology. Dr. Moremen has served as chair of the Glycobiology Gordon Research Conference, President, Board of Directors, and Secretary of the Society for Glycobiology. He directed efforts on an NIH funded multi-investigator ‘Resource for Integrated Glycotechnology’, served as a senior investigator on the NIH-funded ‘National Center for Biomedical Glycomics’, and is a lead Principal Investigator or Senior Investigator on eight additional grants from the NIH and Department of Energy. In 2018 he launched a biotech startup, Glyco Expression Technologies, Inc., as a part of the UGA Innovation Gateway. He has served on editorial boards of Journal of Biological Chemistry, Glycobiology, and Glycoconjugate Journal, numerous NIH grant review panels, and Scientific Advisory Boards of four biotech companies. In 2014 Dr. Moremen was appointed the Distinguished Research Professorship in Biochemistry and Molecular Biology at the University of Georgia and in 202 was awarded the Karl Meyer Lectureship from the Society for Glycobiology. Dr. Moremen has 10 patents and over 180 publications.

Research in the Moremen lab focuses on the biochemistry, structure, and regulation of enzymes involved in the biosynthesis, recognition, and catabolism of mammalian glycoproteins. Carbohydrate structures on glycoproteins contribute to many biological recognition events during development, oncogenic transformation, and cell adhesion. Large numbers of intracellular and extracellular proteins contain covalently bound glycans and alterations in the synthesis and degradation of these structures can occur in human genetic diseases and cancer. Many questions remain regarding the regulation of glycosylation pathways, the structures and functions of the processing enzymes, and the specificity and regulation of protein-carbohydrate interactions during development. Research in the Moremen lab is focused on developing novel strategies to address contemporary problems in the regulation, roles, mechanism, and machinery of mammalian protein glycosylation with efforts in four main areas:

1) Structures, specificities and mechanisms of mammalian glycosylation enzymes: Studies on the mammalian glycosylation enzymes in the Moremen lab have expanded in recent years with the development of a unified design and expression platform (Repository of Glycan-related Expression Constructs) for recombinant production of all mammalian glycosyltransferases, glycosidases, and sulfotransferases (target gene list of >400 coding regions) in bacteria, baculovirus, and mammalian cells. This multi-investigator effort, initiated and coordinated within the Moremen lab, is focused on production of these recombinant enzymes and has led to new enzyme structures and insights into the structural basis for enzymatic glycan synthesis. This project has led to numerous additional applications in chemoenzymatic synthesis, biochemical and structural studies, and development of technologies for enzymatic modification of glycoproteins and glycolipids in cellular environments to monitor molecule redistribution in the course of disease. The goals of these studies are to provide a biochemical and structural understanding of glycan biosynthesis and catabolism as well as providing enzymatic catalysts for chemoenzymatic synthesis. This project has been funded by an NIH P01 grant (P01GM107012, Mammalian Glycosyltransferases for Use in Chemistry and Biology) and presently by a multi-investigator NIH R01 grant (R01GM130915, Origin of N-Glycan Site-Specific Heterogeneity). For further information please see: glycoenzymes.ccrc.uga.edu.

2) Protein-carbohydrate interactions: Cell-surface and extracellular glycoproteins and glycolipids play unique and critical roles in mammalian physiology. One of the major glycan classes at the cell surface and within the extracellular matrix are the proteoglycans (PGs) that play diverse roles as co-receptors for cell surface signaling, scaffolds for cell-matrix interactions, ligands that create morphogen or chemokine gradients in development and inflammation, and numerous other contributions to signaling and cell surface structure. Little is known about the details of PG interactions with binding partners or their mechanisms of biological function. The Moremen lab directs a multi-investigator project with goals to develop a novel, integrated technologies that will address the challenges of PG structures, interactions, and biological functions by leveraging advances in analytical, synthetic, structural, biochemical and biological tools. This project has been funded by an NIH P41 grant (P41GM103390, Resource for Integrated Glycotechnology). For further information please see: glycotech.uga.edu.

3) Regulation of glycosylation machinery in mammalian systems: The Moremen lab is also involved in a collaborative project focused on determining the structures and regulation of glycans associated with glycoproteins and glycolipids in animal systems. The overall aims of the program are to examine the changes glycan structures during development with a particular focus on embryonic stem cell differentiation. The Moremen lab has developed platforms for analysis of glyco-gene transcript abundance using a custom real-time RT-PCR strategy as well as next-generation RNA-Seq methods. Integration of the transcript abundance data with the glycan structure analysis developed by other research groups in the CCRC will be accomplished through the bioinformatics group associated with the research program. This project has been funded by an NIH P41 grant (P41GM103490, National Center for Biomedical Glycomics). For further information please see: glycomics.uga.edu

4) Structure and biochemistry of glycan trimming enzymes involved in glycoprotein biosynthesis and catabolism: The fourth area of focus in the Moremen lab is on the enzymes involved in glycan trimming in the secretory pathway that are essential for N-glycan maturation as well as playing a role in the catabolism of misfolded nascent glycoproteins in the endoplasmic reticulum (ER-associated degradation).